What may I help you with today?

Please fill out the details and our experts will get in touch with you shortly!

Your response has been submitted. Our experts will get in touch with you shortly. If it is urgent, please reach out to Mr. Devanshu Bindlish at +91 836 858 6435. 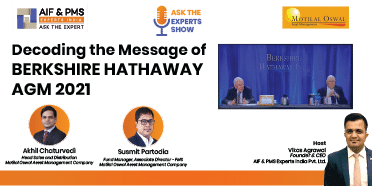 AIF & PMS Experts India got the opportunity to curate a brilliant session in association with the Fund Manager, Mr. Susmit Patodia and the Head of Sales and Distribution, Mr. Akhil Chaturvedi of Motilal Oswal Asset Management Company, on 19th May, 2021. with Mr. Vikas Agrawal (MD & CEO of AIF & PMS Experts India) where they have addressed the topic – “Decoding the Message of Berkshire Hathaway AGM 2021”. The experts were seen verbalizing about the key takeaways of the AGM that was sermonized by Mr. Warren Buffett and Mr. Charlie Munger on 1st May, 2021.

Investment is an art!

To invest in a business, one should have a complete understanding of the company. It helps the money to compound in future. The only key to have a better understanding is reading a lot. That’s what Buffett does and many of the successful people do! Also, there is a need to curb some myths like of diversification! Well, diversification is good, but only to a limit. One should not follow the path of heard mentality.

It is rightly said that, “Be greedy when others are fearful and be fearful when other are greedy”. Heard mentality always stands at the loss side. One cannot define a period! Long term does not always mean 1 year or 5 years, if you are betting on the right horse, there is no end to it.

The zone of investment is another noteworthy constituent. If one has exposure in equity, he should know the ebbs and flows associated with the same. Equity is not a fixed deposit; it continues till the point the business continues. Market keeps testing people and one who passes the test ends up making lots of money. A basic rule of investment says that, buy great management and let it compound but also don’t but anything that will lose money.

Hence, investment is considered to be an art!

Epitomizing the AGM at once, there are few noteworthy points that has been witnessed which are trailed below:

1.Looking at the top 20 companies of the world today, 13 among them belongs to the US and before 30 years, the same number was equipped by Japanese companies which is now at zero. It makes us understand that one can’t be best in every cycle of time. Taking an example, one can make money being in equity as long as he is associated with the fund, but he cannot make money every year.

2.Second point was, when asked about the role at Berkshire Hathaway, Buffett said that he is Chief Risk Officer while Munger replied that he is the Chief Culture Officer! If we see this with another view, in businesses too, the advisors act as the Chief Risk Officers only! And ultimately everyone is their own Chief Culture Officer as only the person knows what works for his upliftment and what brings him to the ground.

3.Third constituent stated that never expect perfection from anything you are associated with. There is nothing called perfection. There is always the scope of improvement. The joy lies in the journey with consistency and not trying to reframe it.

4.The fourth point stated that if you are not confused with what is going on in the world today, you don’t understand it! Nobody knows the perfect solution. Some people just get it right because of their probability but perfect solution is in nobody’s hand.

5.The last point differentiated between situation of two time zones. It stated that now it is very different situation than 2009, so comparing the two makes no sense. 2009 witnessed few of the private enterprises failing and that was the reason of delaying of the government’s action and now it is the government which is failing.

It was visible that airlines companies needed support from the government because there were tax concerns. Before the pandemic, Berkshire Hathaway owned 10% of all the major airline companies. If they would have continued owning the stocks, and since there was possibility of government bailing out, the tables would have turned on Berkshire Hathaway. Buffet’s statement “To save the airline, they have sold the stock” clearly justifies their stance.

Just before the pandemic, they owned 11-12% of share of bank of America but when the pandemic hit, they did not want to have that much exposure and tried cutting it down to below 10%. As this is a unique crisis and in such a situation where the banks are at the stage of collapsing, having such exposure in one of the largest banks hints for a red signal. Whenever a crisis hits, the first thing a person do is reduce his leverage. They wanted to bring down the leveraged companies and as banks have most leverage with them, they have decided to reduce the exposure in them. On the other side, they never thought it would go on the other round, they have predicted the economy to be in turmoil, however the market behaved differently.

It is often been reiterated that if one buys their own stock less than the intrinsic value than they are adding value to the shareholders. The concept of buyback became complicated in last 3 years when the interest rates gone to zero. The companies started borrowing at 1% and doing buybacks. They were certainly not wrong on their side, but it was more like inflating their own stock by borrowing. One of the key individuals who knows the functioning of intrinsic value is no other than the promoter of the company. So, as long as one does buybacks on the value of the business which is more than the share price, they are riding on the right horse!

Can Buffett’s criteria of smart investing be applied in Indian Market too?

Buffett criteria of consistent earning power, ROE, Capable management, sensibly priced of value investing can certainly be applied in Indian Market too. The sentence is the philosophy that many investors follow. The quality companies, run by quality people can grow by reinvesting their profit for a long period of time can be purchased at a reasonable price. For quality embedded with consistency, the concept of buying something at a cheap price is insignificant. We don’t get anything great with the cost of average thing. One can buy great companies at good price. The concept remains the same that, buy great companies at good prices but not great companies at wonderful prices. Market keeps evolving as more and more people are entering the market by bettering the market. It requires upgradation of knowledge, understanding and interpretation.

The informative session was followed by brainstorming Q&A round which is definitely not worth missing! In case you missed the opportunity to associate with the experts, we are providing below the link to connect with them on YouTube at https://youtu.be/HigbfPcE_lI!

The Best Alternate Investment Funds in The Last Three Years: Select The Most Suitable One

Overview of One of The Best AMC: Motilal Oswal

Exclusive Webinar on What Is SEBI Registered Advisory Portfolio

Exclusive Webinar on The Launch of MeritorQ PMS by Marcellus

Vikaas has been an erstwhile member on the Mutual Fund Advisory Committee (MFAC), a high-powered committee appointed by SEBI. He also served as a director on the board of the Association of Mutual Funds of India (AMFI) for over half a decade and had led the Exchange Traded Funds (ETFs) committee. More recently, Vikaas was associated with the Asset Managers Roundtable of India (AMRI), the nodal body for FPIs in the country.

Founder and Director of Negen Capital

Negen Capital was founded by ‘Neil Bahal’ in June 2007. Negen Capital has vast exposure to Capital Market dealings, and Directors of Negen Capital have been investors for more than 2 decades and have good experience in research and analytical processes. Negen Capital started as a sub-broker to provide securities dealing services to retail clients. Negen Capital forayed into Portfolio Management Services (SEBI registration: INP000005414) in 2017. In December 2021 CRISIL and PMS Bazaar awarded Negen Capital PMS with a 5-star rating in the multi-cap category based on an independent market study. Negen Capital follows a focused investment strategy on Special Situations & Technology Investments.

Formerly Deputy CIO – Equities of ICICI Prudential AMC- amongst the top fund management houses in India, where he was instrumental in setting up research processes, designing product strategy as well as for talent development
He actively managed assets of INR 25,000 crores including some of the largest flagship funds for ICICI Prudential.
Under his management, the Value Discovery fund grew from INR 1,500 crores to INR 20,000 crores
Has a track record of delivering industry-leading returns through market cycles.

Aashish holds a Bachelor of Engineering in Polymer Science from Pune University and a Masters in Management Studies in Finance from NMIMS, Mumbai University.

Aashish is responsible for strategizing, growing, and managing the operations at WhiteOak Capital Asset Management Limited.

Aashish has over 20 years’ experience in business strategy and management, process driven sales and distribution, product development and marketing of investment oﬀerings. He has been engaged with India’s private sector asset management industry for pretty much its entire growth trajectory post 1998.

Aashish holds a Bachelor of Engineering in Polymer Science from Pune University and a Masters in Management Studies in Finance from NMIMS, Mumbai University.

He joined Motilal Oswal Group in 2000 and has been responsible for building as well as running various businesses over the last two decades. He is a part of the Executive Board that drives business strategy and reviews for all businesses besides capital allocation of the group.

Raamdeo Agrawal is the chairman and co-founder of Motilal Oswal Financial Services Ltd. He is known as a renowned value investor who believes in the power of compounding. In 2019, he was among the list of billionaires according to Forbes, with a net worth of $1 billion in 2018.

Raamdeo was born and brought up in the village of Chattisgarh. He is a man with dignity and discipline. Later he moved to Mumbai to study to become a Chartered Accountant. He wrote the book Corporate Numbers Games with Ram K P. Mriparia. Mr. Raamdeo also authored The Art Of Wealth Creation.

He maintained a consistent track record of the highest integrity in tax payments for five years from FY95-FY99 and thus received Rashtriya Samman Patra by the Central Board of Direct Taxes for the same. One would be glad to know that Raamdeo Agrawal considers Warren Buffett a mentor, and his investment strategy is exceptionally inspired by him.

Sunil Singhania founded Abakkus Asset Manager LLP, an investment management company, in 2018 after 24 years of work experience. He is a chartered accountant who then became a chartered financial analyst from CFA Institute.

Mr. Singhania was a member of the 15-member international committee that rewrote the Code of Ethics handbook of the CFA Institute. For eight years (2005-13), he headed the Indian Association of Investment Professionals. The CFA Institute also enlisted him as a board member, and he later became the chair of the investment committee.

The renowned CFA worked at Reliance Capital for 15 years, where he initially headed the equity investments with a focus on Indian companies. He then went on to become Global Head- Equity at Reliance Capital. During Mr. Singhania’s leadership, 100% growth occurred in a reliance growth fund in 22 years.

BOOK A CALL WITH EXPERT

Your response has been submitted. Our experts will get in touch with you shortly. If it is urgent, please reach out to Mr. Devanshu Bindlish at +91 836 858 6435

Your response has been submitted. Our experts will get in touch with you shortly. If it is urgent, please reach out to Mr. Devanshu Bindlish at +91 836 858 6435